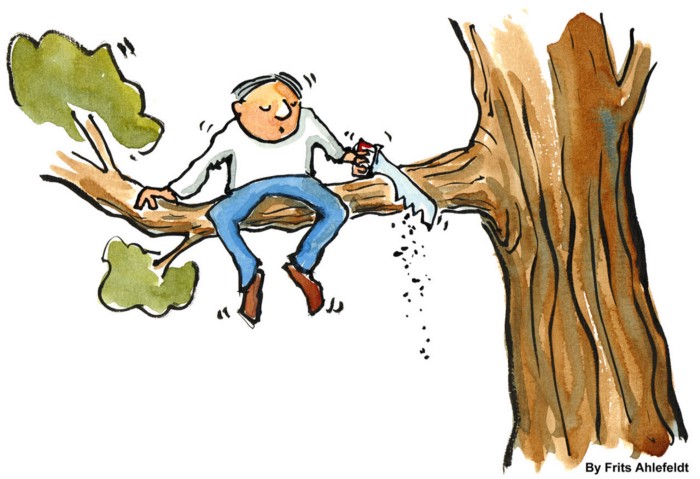 An epic ego fail cleared the way for ahimsa.

I am fundamentally weak, in both physical strength and emotional resolve. Odd, then, that my early career was as an Infantry officer in the U.S. Army. Soon enough, I realised I would not follow in the footsteps of Patton or MacArthur.

In 1991, I showed up at my first unit — one of the few light infantry companies in Germany, where tanks dominated the terrain — while my company was on a field exercise. The lieutenant whose platoon I was taking over let me borrow his equipment so I could get straight out to lead the next mock operation. I didn’t even drop off my bags at the garrison.

My platoon comprised three squads of about ten men each, plus a communications specialist and a medic. They had been ‘in the field’ for a week before I arrived and were exhausted. Still, they were excited to see their new platoon leader. I sported the tough-man’s short haircut and the badges to show my parachute and Ranger qualifications. Surely this identified me as a leader worthy of their respect???

Our task: conduct a ‘movement to contact’ in the wee hours between midnight and sunrise. A force embarks on this type of mission when they have a rough idea but no specific intelligence of where the enemy is. It involves moving in a formation that lends itself to rapid deployment from traveling to fighting posture, so that when you meet the baddies, you can quickly transition to the attack.

Our plan followed a standard template of such operations. I traveled behind the lead group, with the platoon sergeant (the oldest and most experienced soldier in the unit) just ahead of the trail one. The radio man moved with me, the medic and the machine guns with him. When we made contact, his contingent would pull up beside mine to bring a volume of fire on the enemy that pinned them down. Then I would peel off with an assault force to swing around the flank while the platoon sergeant and his guys continued to pepper the enemy with gunfire to keep their heads down.

I charted our route and distributed the relevant compass azimuths and distances for each leg of the mission to the squads. After a thorough briefing, careful equipment preparation and detailed rehearsals of the scenario described above, we set out on the mission.

The movement went well, but in the featureless terrain I struggled (though I never admitted it) to verify our position on the ground relative to the map. Once we’d covered more than the planned distance without any sight of the bad guys, I stopped the formation to convene a leaders’ meeting to double-check where the devil we were.

We decided the enemy must be very near. I took an “executive decision” to place the platoon sergeant and his contingent into an ideal position to fire onto the identified terrain. Then I set out with my assault team to sneak up on the enemy from the right. When I gave the signal, we would spring a perfect surprise attack on the opposing force, none of whom yet realised we crouched at their doorstep.

It was all coming together. In addition to demonstrating textbook planning and preparation, I was showcasing the flexibility that came with real tactical genius. My ego buzzed. The men had shrugged off their sleepiness; they looked sharp and poised. We swept around in a stealthy arc, knowing we were but moments from decisive victory.

A shot rang out just ahead. The enemy must have spotted us! I ordered my assault team to return fire and launched a green flare — the signal to the platoon sergeant and his group to start shooting as well. All hell broke loose. The rattle and cough of automatic weapons echoed in the predawn darkness. The smell of cordite filled the air.

I moved my team forward in bounding rushes. First one half, then the other. Everyone moving in short bursts — three steps then hit the ground, another three then back to the ground. We closed in for the final assault. Time to signal for the platoon sergeant to stop firing. As we prepared to sweep across the enemy position, we didn’t want our colleagues to shoot us — the ultimate tragedy.

Before I could launch the flare for that signal, I caught sight of several enemy faces, only to realise that they were not the enemy at all! My sweeping arc had traversed a rather grander swing than planned. I had circled around completely.

Back then, the Army used technology similar to today’s laser tag to identify ‘hits’ from the blank rounds we fired in exercises like this. Soldiers’ detectors beeped around me, signifying injury and death. Both my assault team and the platoon sergeant’s support group inflicted heavy casualties that day, but we inflicted them on one another! In a spectacular display of tactical ineptitude, I had destroyed my own unit.

The opposing force sat, bored, half a mile away. Awaiting sunrise and breakfast, they were confused by the sound of fighting to the southeast.

Lucky for me, my company commander subscribed to the school of learning through mistakes. He assured me that my unit and I had done many things well (before we engaged in self massacre). My men were strangely forgiving of the fact that I’d led them to slaughter themselves. Over not too great a time I (re?) gained their respect and went on to enjoy a fantastic year, including plenty more field exercises.

My commander was right — we learn from our mistakes. Despite having bucket loads of fun with a quality bunch of guys, I left the military after fulfilling my obligatory service. I’ll leave the fighting to those better suited to it.