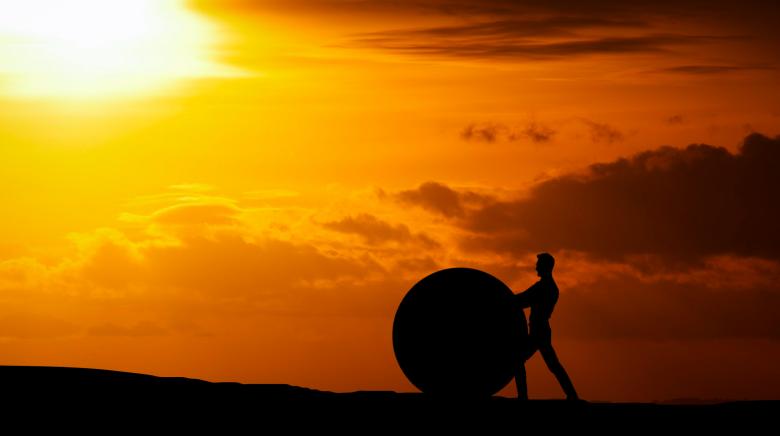 Years ago, while on a canal boating holiday with my in-laws, I learned an important lesson about personal growth.

Having moored the boat along the canal wall for a lunch break, it was time to cast off. I knew this involved taking in the mooring lines and pushing the nose of the vessel away from the wall. Eager to impress my father-in-law with both my knowledge and my strength, I surged into the task with gusto, shoving the boat from the shore with hernia-popping force in an effort to get us going quickly.

Both a sailing and canaling veteran–it was his boat, after all–my father-in-law let me strain myself for a while, and once the veins near my temples stopped threatening to escape my skin, he told me what should have already been obvious from my physics classes. This boat is extremely heavy. Even in the virtually frictionless canal water, no human’s force can accelerate it rapidly. Remember, F=ma, and when m (the mass) is so huge, any force (F) is only going to produce tiny acceleration (a).

The good news, he went on to add, was that with no friction, any amount of force will move the boat, albeit slowly. So all you need to do is stand on the shore, leaning (almost) effortlessly against the boat, and it will nose out as needed. You just have to keep applying that light force long enough for the movement to build up. No temple-vein swelling required.

Later that summer, I was on a solo, thousand-mile cycling expedition when the lesson came back to me. Sometimes, the challenges we’re tackling are like the boat–big and heavy. A quick, peak effort, however impressive, is unlikely to make a big change. Much more valuable in these cases are persistence and stamina.

Big personal or professional changes don’t normally happen quickly. And because we expect and want them to, we become deflated, failing on the persistence front. So the change doesn’t happen at all.

Persistence isn’t sexy. It’s the sort of compliment a sports coach might give a player who lacks any special athletic or technical prowess worthy of mention. Yet, it is often what is most needed and most obviously lacking in periods of personal or professional change.

When you are frustrated with your progress on a goal–losing weight, following up on leads, coaching your team members, whatever–ask yourself, “What would I do if I were more persistent?” The answer is almost certainly that you would keep “showing up” and doing the simple thing, even when no one is there to applaud a heroic show of strength or talent.

I’ll preview a second physics lesson here and share it tomorrow. Working with that boat was something of a special case because of its low-friction environment. Imagine my trying to shift it if it were sitting on land! It turns out that friction is an important concept as well in personal change, and one of the greatest frictions we face is the existence of (often hidden) objectives that work against our conscious objective. And those hidden aims are often based on outdated assumptions about ourselves and the world.