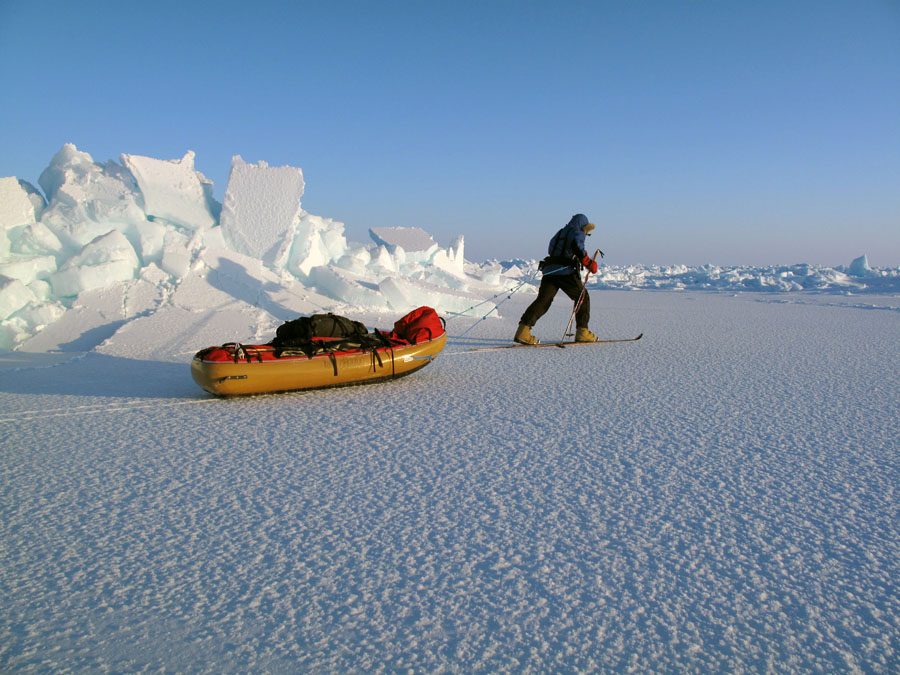 Yesterday I shared an article looking at concepts from physics applied to personal growth. I want to continue that today, looking at friction.

We can think of friction as a force that’s counter to movement. In the picture above, imagine how much easier it is moving a sled across that snow and ice than it would be dragging it across dirt, grass, or sand. Friction applies not just to physical movement, but also to change, or growth. We look to change, but elements of friction can work against us. Plenty of forces out in the world can make things a bit more difficult for us, but the counter-forces I’m considering are ones inside us.

Some years ago, I came across a theory or tool called Immunity to Change. It’s something Robert Kegan and Lisa Lahey came up with at the Harvard School of Education. And it basically asks us to consider that we have unconscious commitments that can run counter to our conscious ones. Although these commitments are hidden, we can find them and do some investigation to scale them back. To reduce that friction.

Here’s how it works. Let’s go through six steps. I’ll give examples of when I put this to use, and I invite you to try the exercise yourself.

Identify a commitment to change that you have now. Or it could be one that you’ve had in the past and had limited success with. It should be a behavior that you are committed to, not an outcome, and it should be your own behavior. It should feel important. I mean, really, when you think about it, you should feel it in your chest or gut.

My example from about five years ago is all in the context of my wanting to get more clients for my consulting and coaching work. So my commitment was to be much more active in my client prospecting and development. That’s the behavior that I was committed to carrying out.

Now, identify what concrete things you’re doing or not doing that work against that stated goal. And for this discussion, maybe we can think about those things as Frictions. Again, these should be your own behaviors.

In my example, despite my conscious commitment to increase and improve my client development, I was not systematically generating discussions. Plus, when I did line up the discussions, I wasn’t having them in a way that proposed solutions to concrete client problems. I was being vague and leaving things open at the end of meetings.

It’s worth considering that those Frictions are serving a function, protecting us in some way. So the third step is to identify the fears that come to mind when you think about acting counter to the Frictions.

My frictions were that I was failing to generate sales discussions and that I wasn’t making the ones I had concrete and commercially effective. Now, when I consider the opposite of that, which is setting them up and making proposals, what fears come to mind for me? Well, I was afraid that I would come across as naive in those discussions. But there was something a little deeper, which is that I felt that in having those sorts of sales discussions I would come across as needy or grubby. And then deeper still, there was fear of rejection.

The fourth step looks at these fears, and it asks, “What hidden commitments might I have that, in light of those fears, make the actions in Step 2–the Frictions–make perfect sense?”

These competing commitments are within us just as surely as our conscious commitment is, but these ones sit deeper. They’re back in our reptilian brain, while our conscious commitment is up front there in the cerebral cortex. And the thing is that when those brain regions go head-to-head, the reptilian brain tends to win because it’s wired at more of a survival level. And we unconsciously take the commitments of Step 4 as ones closer to the level of survival.

It’s worth taking this thought further, to identify what assumptions lie behind and hold together that network of fears and hidden commitments. These are big assumptions about life, about ourselves, and about business.

They can be over protective. Like asthma or other autoimmune disorders, they can see threats where there are none, or they can amplify a threat beyond any real sense of proportion. In this way, our Frictions can be based on fictions.

In my example, there were a number of assumptions at play. The first was that selling is for losers–that real quality should attract business on its own. And that even having to be out selling was proof of weakness.

I also had an assumption that the party holding the money and making a purchasing decision in any commercial exchange has disproportionate power. And of course, as the seller in this case, that wasn’t me.

Finally, and deepest, there was an assumption that rejection is unsurvivable. There was an association of rejection with the ultimate BAD, like with death. My life had largely been a succession of plaque-on-the-wall successes, so rejection seemed unbearable.

After identifying these assumptions, you can design bounded, safe experiments to put them to the test. In a way, it’s saying, “Having uncovered them, why don’t I step from behind the protections (the hidden commitments) and see what happens?” Just view it.

The good thing about the language of experimentation is that you’re not making a huge change, sight unseen. You’re using your own experience empirically, to test whether these assumptions hold. Let that flow through to those competing commitments and the Friction behaviors they drive, and see what happens. They will normally reveal an absolute fiction or a fiction of disproportionality.

In my example, first of all, I chatted with other people, not just other consultants and coaches, but also people I’d worked with in the past or who had used coaches or consultants. They shared their perspective as a buyer: they felt quite the opposite of what I had been unconsciously assuming. They felt like the holder of unique knowledge or special ability to help others (the coach / consultant) had disproportionate power in the conversation and in the commercial exchange. That was interesting to hear.

That aside, I did just push forward and of course, my experience included rejection. I had conversations that didn’t yield engagements, but I’m here writing this post for you, so I did survive!

And finally, when I uncovered my assumptions about sales and commercial exchange and set them to the side pending investigation, I came to recast my story of sales discussions. More as joint problem solving, an effort to help others. And then what happens commercially after that is an exchange of value, not a grubby approach from one side to a more powerful party. It is an offer to help and then an exchange of value. That’s been obvious to most of you for a long time(!), but my background had placed it differently.

Parallel to the concept of friction in physics, we can want to go in one direction yet house forces that counter our conscious intention. Kegan refers to this as having one foot on the accelerator and the other on the brake.

Kegan and Lahey’s Immunity to Change tool helps us notice the brake foot and become more comfortable with taking it off. At first, we might try it while driving around an empty parking lot, but what we prove to ourselves gets us ready for the road.